Weber's Highway 11, Orillia on a cool evening in August

On my quest for the World’s Greatest Burger, I would be remiss if I didn’t include Weber's on Hwy 11 north of Orillia, Ontario. I have almost never passed by without stopping for a burger, fries and a beverage.

I have always thought there were only two reasons the Weber’s burgers tasted so good:

You’re on your way to great times so everything tastes better!
They grill them over live charcoal.

After my visit last week, I realized there are a few more reasons to include Weber’s (the original, not the full service restaurant in Barrie) on your burger list. Yes, those first two are true. But here are some other reasons to stop at Weber’s:

They’re organized. Outside order takers prowl the line, and those lines get pretty long, so you don’t have to wait to get to the front to order. It keeps things moving.
The staff is having a great time. They’re a bunch of fresh-faced young people (with a few older folks in the mix for maturity) who come back year after year to work at Weber’s. The music is loud, and they’re having fun! You can’t help but want to be part of the enthusiasm.
They’re so damned service oriented! On my visit I was the last customer of the night; they locked the doors behind me. As I sat out front eating my burger a family came to the door and tried to get in, then realizing they had come to late they went to the side to ask if they could just use the restrooms. Not 5 minutes later the family came out with a meal, thanks to the Weber’s team going the extra mile to satisfy – no small feat at the end of a long and busy day.
You can’t have a great burger unless the fries are great. Weber’s cuts them matchstick style (like McDonald’s and In N Out).

Great? The service and atmosphere
Good? The burger
Room to Grow? Please don’t – just stay on Highway 11 and keep on doing what you do!
The Ultimate Comment Card Question: based on this visit, would I come back? Count on it.

Posted by Jeremy Tyrrell No comments: Links to this post

Email ThisBlogThis!Share to TwitterShare to FacebookShare to Pinterest
Labels: The Hungry Trekker 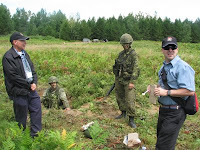 I spent the whole day from before sunup to after sundown with Gord Henderson a couple of weeks ago. If you’re not from Windsor or don’t read the Windsor Star, you don’t know that Gord is Windsor’s one and only political columnist.

If you do know Gord’s writing, you know that on occasion it is very good. When Gord writes about something he has researched or knows well, he is second to none. Some of the time it’s pure gold.

We spent the day with the Reserves of the Canadian Armed Forces in Petawawa. Gord wrote a beautiful column about it. You should read it. I'd love to write about my experiences that day, but Gord wrote it better than I ever could.

In n Out Burgers 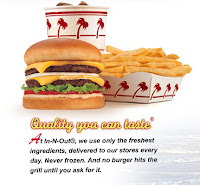 This was my fourth visit to In n Out Burgers, the second on this trip to Las Vegas alone. I am on the quest for the world's best burger, and In n Out has been in the running since my first visit. My buddy, a career McDonald's manager had recommended it, and I had wondered what a McDonald's manager could possibly know about good hamburgers. Great Egg McMuffins, maybe, but hamburgers? Boy, was I wrong. Sorry I ever doubted you, Victor.
In n Out has been around since 1948. I imagine that Harry and Esther Snyder started out across the street from brothers Dick and Mac McDonald in California, although that's just the way it plays out in my mind. McDonald's started out in California in the late forties as well. The McDonalds sold out to Ray Kroc, a milkshake machine salesman, who sold the heart and soul of the great American hamburger in a frenzy of rapid growth, while In n Out stayed true to their passion - burgers, fries and a beverage. That's the whole menu. No freezers, no microwaves, no heat lamps. Great burgers, great service, good old American fast food. Burger, fry and soda pop for under $5 in only three states - Nevada, California, and Arizona. No franchises. The Snyder family still owns every store (200 of them +/-). 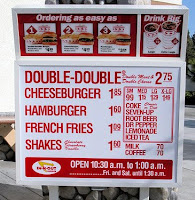 Great - the burger. Grilled on a flat top. A zillion variations, but only if you're in the know. Apparently there is a "secret" menu, but for the rest of us there is nothing on the menu except three combos using the same great burger with or without cheese, single or double. Fresh lettuce, onions and tomatoes garnish a toasted bun. Some sort of thousand island type dressing. The fries are matchstick cut, fresh - the kid was slamming potatoes through the slicer into the water filled sink while I watched!

Good - dining room cleanliness can get a little bit behind, but they were slammed and they were running out there trying to keep up, but the people just kept coming in right until closing time at 1:00 a.m.! The staff was exhausted but pumped and on their game right to the end. I haven't seen it that busy in a Canadian fast food restaurant in more than 20 years, but that's how it used to be at McDonald's in my little town.
Room to Grow? Forty-seven states and ten provinces, but let's hope not. They'd have to sell out to do that; they'd have to compromise. I hate the way Tim Hortons in Canada has sacrificed quality for growth and now sells warmed up frozen doughnuts and crappy coffee in more locations than Tim himself every dreamed possible. No, I'll stick to finding an In n Out on my occasional visits to the west.
The Only Comment Card Question that Really Matters: would I come back? Heck, I bought the t-shirt! I can't wait to get back.
Posted by Jeremy Tyrrell No comments: Links to this post

Jeremy Tyrrell
Windsor, Ontario, Canada
Committed to good governance, social justice, the dignity and rights of all human beings especially the poor and the marginalized, and the service of God and man.